Taking care of the nails and trying to find the least invasive and damaging technique is what makes ladies constantly search and discover new techniques. One of those techniques is dip powder nails or more commonly known as SNS nails. You may wonder, is SNS better for nails than gel?

SNS nails use only glue and powder to cure the nails and require no use of a UV lamp. This is what makes them distinct from gel nails. Both of them can be equally damaging for the nails if they are not removed correctly, so there is no verdict on which one is better for your nails.

If you believe that SNS nails are better because there is no use of a UV lamp, you are very wrong, and further in the text, I will explain why this is irrelevant.

What Are SNS Nails?

It is very common in the beauty industry that some technique gets called by a certain brand that made it famous. SNS nails are the name for dip powder manicure, called by the company which is behind the brand of dip powder – the SNS or Signature Nail System.

SNS nails are using a combination of dip powder and glue that is capable of making a solid base on your nails that will be durable and will last longer.

What’s differentiating SNS nails from regular nail polish is the distinctive smell the nail polish has, which is not present with the SNS technique. And what sets SNS nails apart from gel manicure is that SNS nails don’t require a lamp to cure the nails.

SNS nails will last longer than regular nail polish or the Shellac, simply because the formulation is very different and is closer to acrylics. They will create a stronger layer on top of the natural nails which will be more durable than the standard liquid polish.

Do SNS Nails Damage Your Nails?

There is no manicure technique that can promise you that it will not damage your nails. With every technique you are inevitably damaging your nails, it is just the fact that with some you damage the nails less than with the others.

I must make one remark – if your nails are healthy, then no matter what technique you choose, it is very unlikely that your nails would get damaged. However, if your nails are very weak and damaged, you can only worsen the condition they are in by using different manicure techniques.

SNS nails are one of the least invasive techniques for your nails and are ideal for women who would like to have reinforced nails but would also like to avoid the use of the UV lamp.

With the proper application, SNS nails will last longer, and will not damage your nails as much as other techniques would. The issue may occur when you try to remove the nails by yourself.

In general, the removal time is when the most damage is done to the nails, mostly due to inappropriate amateur technique. Never try to remove artificial nails by yourself, unless you are 100% sure you know what you are doing.

Although it is very tempting to chip and lift off the nails, it is strongly recommended not to do this, because this is the time when the nails are the most vulnerable and when you can damage and weaken your nails.

When you try to remove the artificial nails forcefully, you are removing the top layer of your natural nail as well. This is why your nails are left weakened, and more prone to damage and future layering.

Nails that are damaged to this point cannot endure a new set of manicures, and applying another nail polish, gel, or acrylics will just further increase the problem, as already highlighted. If you do find yourself in a situation like this, the best thing you can do is to leave the nails to grow completely on their own.

If you do follow the rules when removing the SNS nails, you will easily avoid situations like this, and your nails would be left healthy and ready for a new set of manicures.

SNS nails are thicker than regular gel nails, and that is the main reason why they need more time to dissolve. They are removed by soaking the hands in an acetone-filled bowl for around 15 to 20 minutes.

If you notice that after this time the nails are not coming off easily, you should keep the hands for a little bit longer in the acetone. Remember not to try to chip off the nails.

Once the SNS is removed from the nails, apply hand cream or moisturize very generously, since the acetone can leave the skin and nails very dehydrated. 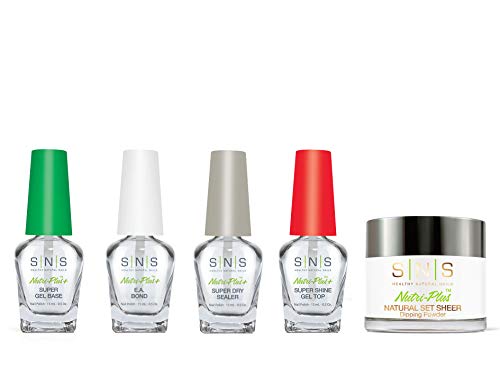 The technique of applying is more or less the same, the only difference is in the way the powder adheres to the natural nails, and which products are used in that process.

SNS nails and acrylic nails, in general, used to have a bad reputation until the correct removal process was found. Before that, it was almost mission impossible to remove acrylic nails without damaging the natural ones.

Today SNS nails are no more and no less damaging than gel nails. As already explained, the nails are bad for the nails as bad as the removal or application process is.

If you don’t apply the nails properly or fail to remove them correctly, you will damage the nails and leave them in horrible condition. The gel nail removal process is very similar to the acrylics, so there is no way you can avoid using acetone for example.

Some women give advantage to SNS nails because there is no use of a UV lamp. Although there has been some controversy saying that the UV lamp is very bad for the skin and overall health, the truth is that we have been exposed to UV lights every day thanks to the Sun.

Studies have shown that the use of UV lamps has no significant consequences on human health, so there is no scientific reason to give advantage to SNS nails over gel nails only because of that.

Here you can read more about SNS and shellac.

MakeupRestart.com is a participant in the Amazon Services LLC Associates Program, an affiliate advertising program designed to provide a means for sites to earn advertising fees by advertising and linking to Amazon.com. We also participate in other affiliate programs which compensate us for referring traffic.

My name is Sophia, and I'm a makeup artist that loves to try different makeup, nail polish, and other beauty products.

link to How To Use CND Shellac Luxe

It’s not uncommon to hear many people talk about how they would love to have their nails done, but they just don’t have the time, and if you’re like this too, then no one can blame you because...

When you are looking for a trendy manicure for a party, the best option you will run across is holographic nails. They will give you a rainbow color effect which can be easily achieved with just a...

This site is a participant in the Amazon Services LLC Associates Program, an affiliate advertising program designed to provide a means for sites to earn advertising fees by advertising and linking to Amazon.com. We are compensated for referring traffic and business to Amazon and other companies linked to on this site.